Although I have been a big fan of all kinds of music, I grew up with mostly Duran Duran. An 80’s New Romantic who had this somewhat flamboyant style about them. Trendsetters in a way and loved their exotic videos which also gave me the urge to go travelling.

One of the things I do enjoy is coming up with new and interesting flavours and naming them.

Some of the new names that I have created include Roll a Disco. An ice cream roll with banana, blueberry and strawberry, although a name change from Tutti Frutti. The disco is there to reflect disco colours this being yellow, blue and red.

Another new addition to the most delicious ice cream flavours list is another Duran Duran dedication. “Cherry Ice cream smile” which is a delicious red cherry and homemade crumble flavour. “Cherry Ice cream smile was created to coincide with an exhibition we were providing ice cream rolls for. The Access Group wanted all their flavours red to coincide with their brand colours.

Nut Nut Nutoreous was one of the first flavours created, along side Rolled Up Mess and The Golden Child. It especially rewarding when customers and clients who decide to have that flavour “get it” and sing it. Haha.

Anyway, we were performing live at Superdry’s HQ store in Oxford St London at the jubilee weekend. I just found out the day earlier that Duran Duran were playing at The Mall Saturday evening. So I said to Oi, my wife after Superdry we’ll go to the concert and see Duran Duran.

I’ve always been a bit of a dreamer, but not in any sense that it will be impossible, I mean I’m the last person who’d answer “What will you do if you win the lottery? Not saying it doesn’t happen!! I mean the experiences I  have had in the last 4 years have been incredible. Who’d have thought that I was asked to perform in 3 European countries or cater on a Mission Impossible set, or even performing live on Oxford St. Dreams and opportunities do come true. 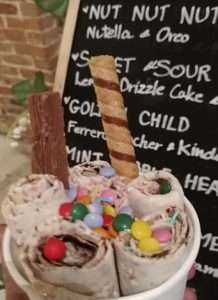